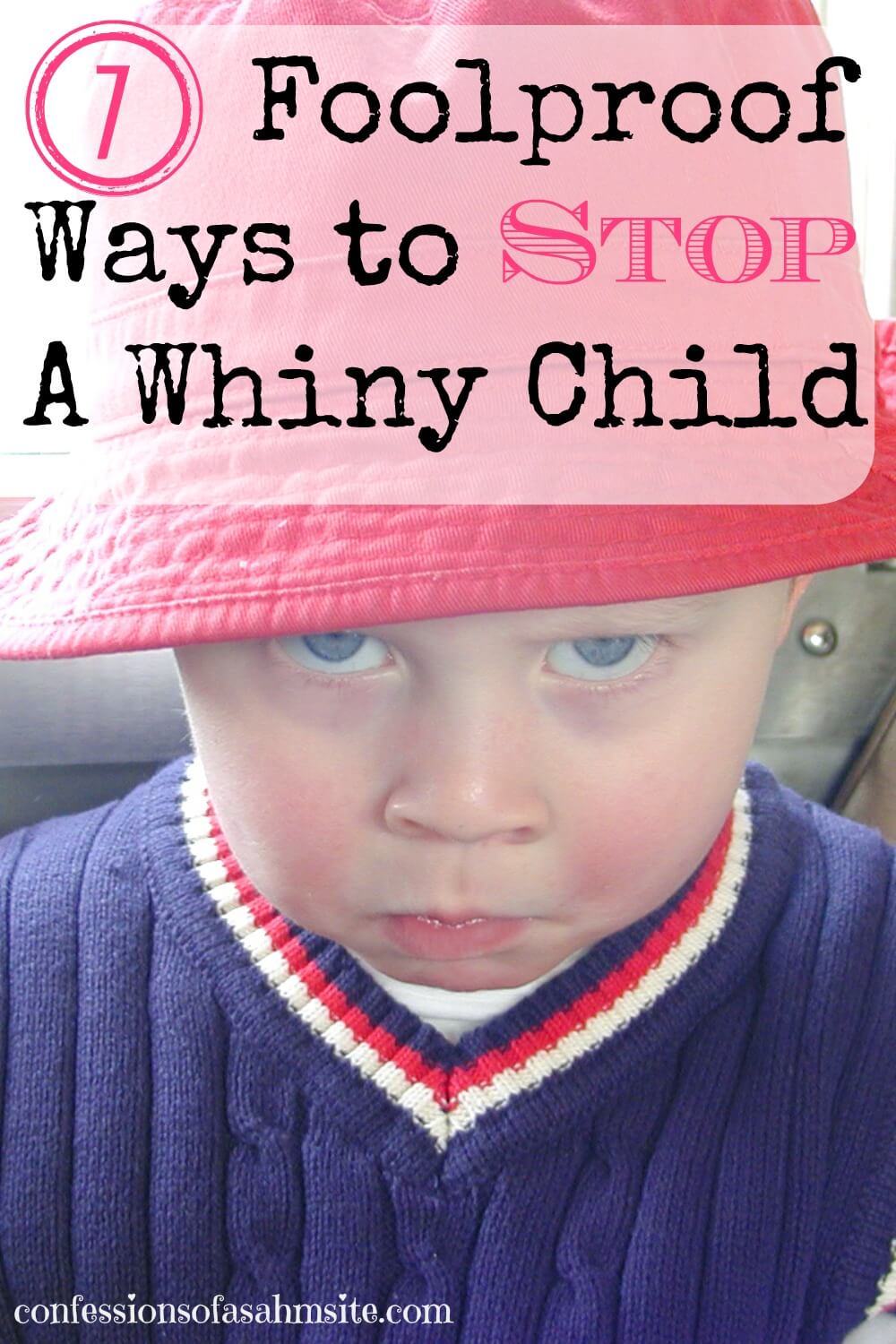 As a mom of two boys, raising them has had many adventures from high fives to oh no’s! Before we had kids we would get up, get dressed and get going. Going to the store was quick, quiet and quite a ride my husband and I both enjoyed.

Now after kids, we still enjoy going out and about but at times, the adventure turns from fun to frowns. All of a sudden one of them starts to whine! Because we didn’t turn on the street he was expecting or because we didn’t go to the store he wanted to go to. It’s as if lightning struck down our car causing a resounding noise of whine, whine and more whine.

First, we have to understand that whining is a form of communication, as my youngest son’s speech therapist told me once. My three year old still doesn’t fully communicate verbally but uses sounds or gestures to let us know what he wants, although he does say a few words.

So, for him to whine and express what he’s feeling is a great thing…sort of. It’s a great accomplishment from when we started with the therapies. Now my five year old, already knows how to speak and ask for what he needs and wants but still whines at times.

7 Tips to Stop the Whine

A child is not born to whine but it is a “learned behavior,” as mentioned in this article from WebMD, Why Kids Whine and How to Stop Them. I’m guilty to say and I confess that this is very true in my case. Sometimes my kids ask for something in a nice tone and because I’m doing something else and don’t attend to their needs immediately, the soft tone they used is now turned to a loud whiny pitched tone.

If I would’ve attended to their needs immediately, they wouldn’t have started their whining. Now, even if I’m doing something else and I hear their request, I let them know that I heard them and to give me a moment.

Just say something like, “mommy is finishing this up and as soon as I’m done, then I will give you the toy up in the shelf that you’re asking for.” This way, your child knows that they have been acknowledged and you are listening. When your child starts whining, which hopefully we prevent it by following the previous step, you need to see what it is that made him whine in the first place? There are times that most of my attention is directed to my youngest and I fail to give attention to my oldest. So what does my oldest do? Start repeating and raising his voice and exclaim, “Mommy! I want a cookie! Mommy! Mommy!” (You’re probably visualizing your child right now after reading that or actually hearing them right now.)

What psychologist Becky Bailey says from the above mentioned article, is :

“when whining does occur, parents should take a deep breath and remind themselves that the child is not trying to be irritating. The child is actually asking for help.”

Do they want your attention, are they hungry or sleepy? Ask him to tell you why he is whining after you asked them to talk with their nice voice since you can’t understand the whiny voice or cry.

Once he lets you know, give him your undivided attention and let them know you’re available. Sometimes, it’s usually nap time when I hear the whines, so I know that once they take their nap, they will wake up in a better mood. Think about when you’re tired or hungry, do you usually get cranky?

I know you’re probably wondering how the heck am I going to get a whiny child to giggle? But it does happen and it has changed the whiny voice into giggles. When your child starts to whine, imitate the voice and look at them in the eyes and ask them if they understood you. Usually that will trigger them to stop in their tracks and make them wonder why you’re speaking in a whiny voice.

Once they see you, start to imagine your happy place so you don’t get annoyed by all the whining and start tickling them or make them laugh. You know what gets your child laughing so use that as your weapon.

Usually I imitate my oldest since he likes playing the imitation game and once I start imitating him, he knows what I’m doing and starts to break a smile. Talk nicely to him and start tickling or whatever makes your child giggle and explain to them that you can’t understand what they say when they whine and to tell you in a calm way.

After the whining has stopped, or at least partially, help soothe your child by giving them a hug. Wipe off the tears and help them understand why you couldn’t attend to their request or explain why they can’t have the new toy in the store.

Don’t just say, “because I said so,” even though that will be our first thought, but help them understand the why. Let them know you’re sorry if you got annoyed or lost your cool and explain that when they want something, all they have to do is ask nicely and give them an example of what asking nice looks like.

Sometimes as parents, we don’t want to hear the yelling or whining and immediately tend to their wants just so they won’t cry. If it’s something you had already said no to, then you must stay true to your word. Children are very smart and know what to do or say to get you to give in.

DON’T GIVE IN! As hard as this sounds, avoid letting them get away with it and explain to them why they can’t get everything they ask for. Soon they will realize that no matter how much whining they do, you will not give in to all their desires.

We taught our boys since they were little to give high fives and knuckles when they did a great job at anything. So how do we show them when they have asked nicely? By giving them praise and giving them a high five!

When you hear your child asking you for something in a polite way, if it is something they can get, let them know you’re grateful that they asked nicely. If it’s something that they can’t get, explain the reason why and suggest a different solution.

Something to the effect of, “we can’t buy that toy, but we can get you your favorite fruit or snack.” If he doesn’t whine, then praise him and let him know you appreciate him for not whining.

Above are the seven ways I use to stop my whiny kids. Remember, if they already requested your attention in a nice voice and you didn’t listen, expect to hear the loud whining! Tip two states that you need to give them time, so interact with your child so they can see that you are making time for them.

Listening to what your child needs, helps reduce the whining. Instead of punishing your child, make him giggle. Give lots of hugs in order to help soothe your child and not whine. Try not to give in to your child’s requests since this will only cause for them to whine more. Finally, give praise where it is due so he knows you appreciate him asking nicely.

P.S. What other tips have helped you stop your child from whining? Please share in the comments below. If you enjoyed this article, share with other parents and subscribe to our newsletter to get additional articles straight to your inbox. 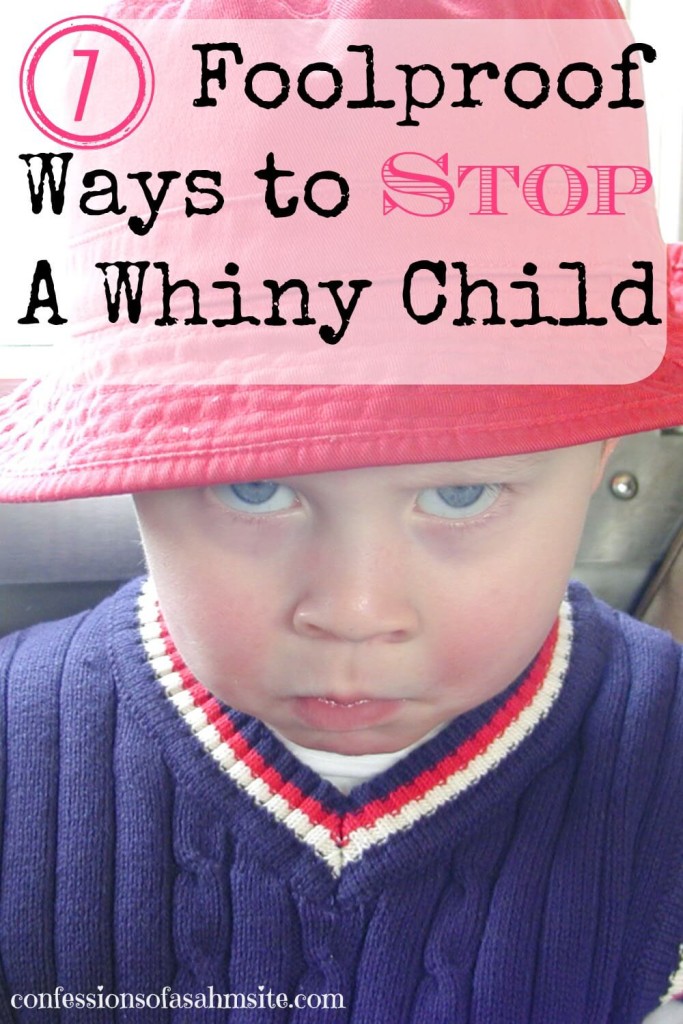 *It’s best to assume that the links that I share are “affiliate links”. This means if you click on the link and purchase the item, I will receive an affiliate commission (at absolutely no additional charge to you). I only stand by products I believe in and I believe in these 100%!
1shares
We use cookies to ensure that we give you the best experience on our website. If you continue to use this site we will assume that you are happy with it.OkNoRead more