The Winds Have Spoken

As we enjoyed our day on the humid beach of Florida, we ate our mouth watering juicy watermelons. Playing a game of who would spit the seeds the farthest, we laughed and joked around.

Without warning, a strong whooshing wind hurled to the beach, lifting sand, towels, umbrellas and anything in its way. Even a jumping balloon with a few kids inside went tumbling down the beach.

Kids screaming and crying could be heard in the distance while parents watched with disbelief.

“My kids are in that balloon, please help!”

All of a sudden my husband and I ran for cover as the sound of golf sized hail started crashing in. No matter where you turned, it was hitting as if a mob was fighting back.

We tried covering ourselves with towels and whatever we could find that would protect us from the hail. It was as if the sky had opened up and started a fight, gods versus humans. 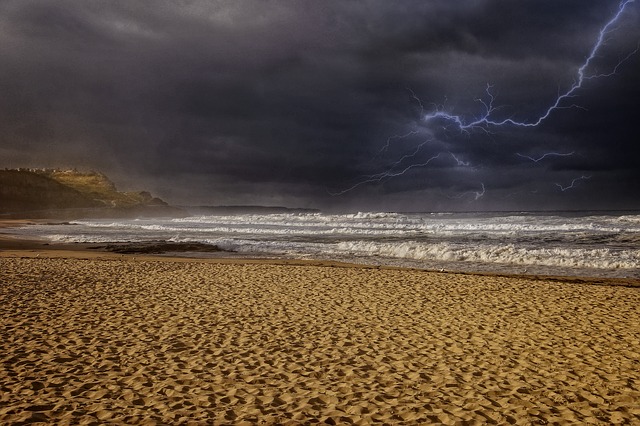 The clouds formed into UFO shapes and were dark and gloomy. They hovered around the beach from the farthest point you could see and onto the beach.

Beach goers were running for their lives seeking shelter. From far away we could see the parents of the children that were blown away in the jumping balloon still running after it to rescue their children. The balloon finally made a sudden stop against a rock wall that was on the opposite side from where we were.

We were finally safe from the hail under a metallic cover from a shaved-ice stand that was close to the beach. There with another 20 people, looked confused and shocked at what we just experienced.

Finally, winds died down and the hail ceased. There were people that had blood drawn from their head, broken windows from nearby businesses and vehicles, and the children that were in the balloon were safe but still crying and a few bruises.

From having been a humid day to a frigid and windy day, we were glad it was over.

In response to the Daily Post: Sudden Shifts which stated:

You’re at the beach with some friends and/or family, enjoying the sun, nibbling on some watermelon. All of a sudden, within seconds, the weather shifts and hail starts descending from the sky. Write a post about what happens next.

P.S. This was only a fictional story but what would you have done if something like this were to happen to you? Would you have gone after the children to help them?